Gregory Keays is a writer whose brilliant future is behind him. But when an extraordinary student enters his life, Gregory is offered one last, glorious chance to save his career. Soon, however, Gregory’s Faustian pact with success unravels around him, and he must turn to darker, more duplicitous means to secure his fame. Set in the dangerous world where real life and literary ambition collide, Kill Your Darlings is an unforgettable novel of ego and delusion, villainy and the betrayal of love.

Frankly, and uncomfortably, hilarious: a kind of horror-show entertainment in which anyone professionally connected to the world of books will scarcely know where to look.
– D J Taylor, Sunday Times

It should be compulsory reading for every creative writing student in the land.
– Daily Mail

Anyone who has read Martin Amis’s Experience has to read Kill Your Darlings.
– Financial Times

Hilarious.should delight anyone who values dazzling prose, outrageous humor, and the vagaries of the human condition.
– The Washington Post Book World

Spot on..As a study in self-delusion, Kill Your Darlings is effective, sharing some similarities with Iris Murdoch’s tale of writerly pomposity, The Black Prince.
– Guardian

A brilliantly entertaining tale of envy and self-deception.
– Newsday [NY]

It’s all here: the self deception, the petty rivalries, the shameless agents, the craven publishers, the brainless celebritiy novelists.. It is Blacker’s achievement that, even as he makes the madness of the writing game wildly funny, he also conveys the underlying tragedy of a marriage ruined, a son lost, a life wasted. Writers particularly will appreciate Kill Your Darlings.
– The Washington Post 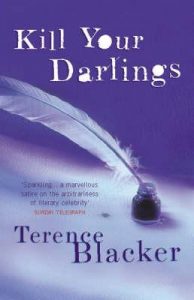